(Ali) Banos offered so many different activities such as walking, hiking, canyoning, rafting and even just walking in the village. My favourite thing about Banos was biking up a pathway in order to reach a waterfall. The bike ride there was very scenic, and we made a few stops in order to ride a gondola near a waterfall. We saw a different type of animal called Sponge; I think it was a type of raccoon, but who really knows. Once we reached the waterfall, I was amazed. I have never seen a waterfall so close before and climbing into really tight crevices was an adventure to say the least. Since I am very tall, it was very funny to have to roll in order to see the waterfall up close. I was actually impressed that so many different types of people were making the difficult climb to the waterfall. I witnessed children and elderly people make the climb which was surprising since the climb was even difficult for me. I have grown up in many major cities where seeing nature was rare, which have made me crave the wilderness. I enjoy its silence and marvel. Another amazing part of the trip was the hot springs. I imagined hot springs to be a stream in the middle of the mountain where I could swim, but it turns out it was in a place similar to a swimming pool. At first I wanted to leave because people were swimming in such close proximity and the idea of personal space was absolutely void. Yet once I entered the water, it was amazing.  The water was incredibly hot, which was very relaxing. I had an amazing time with Jen who was with me through cold and hot.  Overall it was an amazing unforgettable trip.
Posted by Unknown at 7:20 PM No comments:

This past week we spent the weekend at Banos. It is a tropical get away set high in the mountains with waterfalls and jungle all around. It was my very first time at a hostel and to be honest, I did not get a great vibe initially but the place definitely grew on me. I met many interesting people from all around the world, who each had an interesting story to tell. I learned how to play pool and how to lose with dignity. Hhahahha. The thing I loved most about this place was its peacefulness. There's something incredibly warm and sweet about Banos. The town is set in  very remote area and everything such as shops and parks is accessible. I got to hang out with members of my group and get to know them on a more personal level. As well, the nature was breathtaking. One of the most beautiful adventures was getting to get close to a waterfall and actually stand behind it. It was breathtaking. Looking at the waterfall made me really appreciate life and realize that it has so many beauties worth protecting. Since I study environmental science, nature is a huge part of my life. I feel it calms us down and makes us realize the true meaning of life lies beyond houses and cars. I as well learned amusing details about myself such as my body can take some serious bruises and still survive. Experiencing canyoning was amazing. Even though I am not a very adventurous person, I learned that if I am outside my comfort zone I can still survive. The support of Nicole and Jen was amazing. I loved having people around me who made me feel so safe and loved. I owe them a lot or I would still be stuck on that mountain figuring out a way to climb up a waterfall :P.
Posted by Unknown at 6:50 PM No comments:

As my journey in Ecuador is coming to its end, with only one week left, I must say that I've experienced some amazing unexpected things.

For one, though I've always wanted to try, climbing down a waterfall was never on my short term "to-do" list. Last weekend however, we went to Banos and climbed down not one but three waterfalls. Though the group we were with was large, resulting in a lot of waiting around, I was never bored. While I was cold, the five hours during which we were climbing down these falls were so fun. While waiting in line we dared each other to stand under smaller waterfalls, we sat our body fully in the freezing water pooled at the bottom of the waterfall we just descended and chatted up people from Germany, Ireland and France. Never a dull moment.

Another incredible experience in Banos also involved another waterfall. This time myself and two other dear friends went on an excursion on our own to find this famous waterfall that we had heard so much about the night before from some new Columbian friends we made. We took a bus, stayed super alert so we wouldn't miss our stop, strolled through a seemingly abandoned town, through the forest, had some sugar cane and sugar cane juice, bought some bracelets and then finally arrived at the most breathtaking waterfall. We were so proud of ourselves for having found the waterfall and we're totally blown away by the view. Then we saw that there was a way to climb the waterfall all the way to the top and stand behind it. Of course, we did. It was such an exhilarating adventure.

This weekend we are going to Mindo, which is conveniently known as the mini Banos. Quite excited to see what kind of adventures I will have this time.
Posted by Ambre at 6:31 PM No comments:


After several weeks in Quito it was nice to have a break and leave the city. Our trip to Baños has definitely been a highlight of the trip so far. We spent the day on Saturday biking around, saw a dog with a giant croissant in its mouth, got doused by el pilon del diablo waterfall and had an overall nice day.

Saturday night we went to the Baños' namesake- the natural thermal baths scattered throughout the town. Our supposedly relaxing adventure included several trips up and down the stairs to figure out where to change, where to put our belongings, where to get shower caps (that's right we all donned some pretty awesome shower caps), where to take our pre-thermal bath entry shower and finally, where this hot pool was. Up and down, up and down.. at long last we stuck our toes in the water- I think mine burned off. The water was so hot that it may have been boiling at one point. In the smaller pool behind us the water was so cold that  you'd think you were there for a polar dip in Lake Winnipeg in January!  I think there may have been ice you had to break through to get into the water.

That said, Ali and I decided, after a dip in the boiling cauldron, to attempt the frozen ice water. We plunged in and I'm pretty sure my heart skipped a beat. I have to say we did very well- we managed to stay there for at least 2 minutes! The little pool was packed with people braving the ice cold. We dunked our heads under the water just to complete the process. One more minute until our bodies were numb and we ran back to the hot pool to warm up again. The water from both pools in the hot springs come from the nearby volcano- the hot water is heated from the steam near the magma and the cold is glacial melt from atop the crater. This was the perfect relaxing way to end the day- with a relaxing thermal bath!  Thanks everyone for braving the hot and cold waters!!!
Posted by Unknown at 1:20 PM No comments:

One experience from our weekend in Banos that I found to be awesome was when our group went canyoning with MTS Adventure. It was a great experience to do with the whole group and an awesome way to end the weekend. The scenery was beautiful and the staff was extremely nice and helpful. However, when the bus took forever to reach the waterfall (and when we had to turn around), I was a little bit suspicious of how much fun the activity was actually going to be.

One particular experience that I will remember from our adventure was to see Nada be a super trooper at making her way down all six waterfalls. I think if I remember correctly, Nada said that she was not an adventurous outdoor person. It was very courageous of her to go out of her comfort zone and participate in something that was so different. I am extremely happy that I was able to be apart of that experience for Nada… Way to go girl !!!

P.S Nada – I am speaking from my own opinion so please feel free to correct me if I am wrong!
Posted by Unknown at 7:34 PM No comments:

You studied for the test
And you wait for the result
You werent privelidged for paid help,
But you've given it your all.

Maybe they'll accept you
Chances are they won't
No money,  woman or black,
The odds hold you back.

You've made it!  You're in!
But wait, change comes on the wind.
The power targets your academy,
And down it falls so quickly.


Not up to par,
Not fair in judgment.
But what is to be done?
Your back to square one.

Posted by KatieVF at 8:26 PM No comments:

I am in the middle of the jungle, and my feet are bleeding. All I see is spots in front of my eyes, and hear the night.  It’s raining and I just close my eyes hoping the sound will drown away my thoughts. Last night, I was in my bed. I was reading a book “Crime against Humanity”, when my dad came in to wish me good night. As he left my bedroom door, I heard a sound outside our house. Men yelling in harsh voices, and a knock on our door. I slipped out of my bed, and crept to the door and opened it slowly. There were men in our living room, and I could hear my dad talking to them in a low scared voice. My dad is a very large man who usually intimidates people, not gets intimidated. I could hear a sound coming up the stairs, very softly. I thought I was imagining it.  My mom came into my room, with the palest face I’ve seen. I heard gunshots downstairs, at the same time; she gave me something in my hand, and said one word “run”. I crawled out of my window, and ran into the jungle. My mom had always told me if something happened and the Guerillas come, to follow a path in the jungle that would lead me to my distant relatives in Ecuador. I found some dry leaves, and put my head down. All I could see was my father as he was wishing me goodnight. I closed my eyes and wondered if I’d ever see him again. 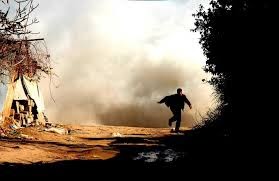 Posted by Unknown at 7:00 PM No comments: